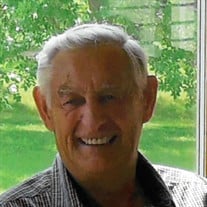 William “Bill” Frank, age 80, of North Redwood, passed away at his home on Friday, August 7, 2020. In honoring Bill’s wishes there will not be a public service. Family prefers memorials to Carris Health-Redwood Hospice Care or Duke Memorial Redwood Area Animal Shelter.

William T. Frank was born on September 22, 1939 to William and Celestine (Kopel) Frank in Morton, Minnesota. Bill attended St. Mary’s Catholic School and graduated from Bird Island High School. Bill married Mary Oliverson at St. Aloyisus Catholic Church in Olivia on June22, 1963. Together they farmed Mary’s home place in Renville County. Bill enjoyed carpentry, fishing, playing cards and spending time with his pets and family. They retired in 1989 and then moved to Redwood Falls in 2009.

Blessed be his memory.
To order memorial trees or send flowers to the family in memory of William 'Bill' Frank, please visit our flower store.