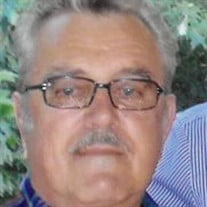 Arrangements are with Nelson-Hillestad Funeral and Cremation Service of Redwood Falls. Condolences may be sent via www.nelson-hillestad.com . Or mailed to the family at: 18132 Cattail Court, Edan Prairie, MN 55346

Wally was born to Henry and Gladys (Sorenson) Kirschstein on October 19, 1932 in Beaver Falls Township of Renville County. He grew up near Cobden and Sleepy Eye areas. He served in the Army from 1952 through 1955, serving in Korea. He earned Service Medals from National Defense, Korea, United Nations, Good Conduct Award and Meritorious Unit Commendation.

Following his return from the service Wally found work as a long haul trucker usually carrying livestock for Potter trucking of Springfield and it was here he spotted a pretty bookkeeper named Mary Trapp and announced he would marry her and six months later on November 27, 1957 he did. The couple lived in Springfield and Sanborn while Wally switched gears and began fixing trucks for Fox Brothers in Sanborn and would do so for 35 years. He and Mary moved onto her family homestead to raise their three children and they helped farm the land until Mary’s death in 1989. Wally was an active member in his church, Faith Lutheran, serving as the treasurer for over ten years. He was also a member of the Springfield American Legion.

Wally loved being outside and fixing on something. Following Mary’s passing Wally and Lois Kirschstein, who had recently lost her spouse as well, found comfort and solace in each other. They were married shortly thereafter and were loving companions for twenty-five years, ten in Sanborn and fifteen in Morgan before Lois’ untimely passing. They enjoyed traveling in their camper spending winters in Texas and Florida as well as a memorable Alaskan trip. They both enjoyed feeding and watering the birds through winter, playing cards with friends and always looked forward to the next batch of grandkids coming to visit.

Wally called Gil-Mor Manor home for five years and it was here after a long decline that he joined his Lord and Savior.

Blessed be his memory.
To order memorial trees or send flowers to the family in memory of Wallace Kirschstein, please visit our flower store.