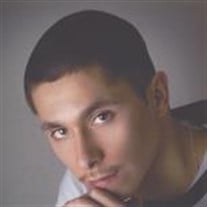 Local arrangements are with Nelson-Hillestad Funeral Service of Redwood Falls. E-mail condolences may be sent via www.nelson-hillestad.com .

Wade Zephier, the son of Sherwyn B. Zephier and Lydia M. Neis was born May 18, 1986 in Marshall. He grew up in Minnesota and South Dakota. He graduated from Marty Indian School in 2004 and attended Minnesota State University, Mankato. He was employed as a chef at Old Chicago in Sioux Falls for three years. He loved cooking and the sport of basketball.

Blessed be his memory.
To order memorial trees or send flowers to the family in memory of Wade "Pretty Boy" Zephier, please visit our flower store.