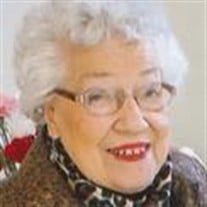 Verna Scharfencamp, 93, of Franklin died Wednesday, February 1, 2017 at Season’s hospice in Redwood Falls. Mass of Christian Burial will be held at 11 a.m. on Monday, February 6, 2017 from Church of Sacred Heart in Franklin with burial to follow in St. Patrick’s Birch Coulee Cemetery. Visitation will be held Sunday, February, 5, 2017, from 1 until 4 p.m., with a prayer service at 1 p.m., all at Nelson-Hillestad Funeral Home in Redwood Falls. Visitation will continue on Monday, from 10 until 11 a.m., at the church.

Verna Catherine Scharfencamp, the daughter of Michael and Bertha (Kachelmeier) Soukup, was born March 9, 1923 in Sleepy Eye. She grew up on the family farm north of Sleepy Eye and received her elementary education in Brown County District 19 country school. Verna attended high school at Sleepy Eye St. Mary’s and graduated there in 1942.

On October 30, 1946, Verna married Paul Scharfencamp at St. Mary’s Catholic Church in Sleepy Eye. The couple lived in Morgan for a year then moved north of Franklin to farm. Two years later they purchased their own farm north of Franklin. In 1961, they moved to a home on the south edge of Franklin where they lived for the next 41 years. Verna moved to Centennial Apartments in November 2003. She was first and foremost a wife, mother, and homemaker, but Verna also was employed as a kitchen assistant at the Franklin Healthcare Center for 27 years, retiring in 2000 when she was 78 years old!

Verna was a life-long member of Sacred Heart Catholic Church in Franklin and actively volunteered in her parish, as well as at the Senior Citizens Center. She also belonged to the American Legion Auxiliary, serving as secretary for two years. While living in the apartments, she looked forward to spending time weekly with the members of her very special prayer group. Verna’s faith was strong and she prayed daily for everyone in her family. She enjoyed coffee and visiting with family and the many friends she made wherever she resided. Sunday dinners at her children’s homes were very special to her. Verna also loved flowers, gardening, and watching birds come to the feeder. She will be remembered for her love of shopping and her stylish outfits.

Verna was preceded in death by her husband Paul, in January 1989; an infant daughter; brothers Wendlin, Clarence, and Francis; and sisters Evelyn and Irene.

Blessed be her memory.
To order memorial trees or send flowers to the family in memory of Verna Scharfencamp, please visit our flower store.