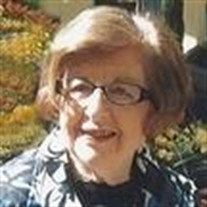 Vergie Asleson, 93, of Redwood Falls died peacefully at her home on Friday, November 29, 2013. Mass of Christian Burial will be held at 11 a.m. on Friday, December 6, 2013, from St. Catherine’s Catholic Church in Redwood Falls. Visitation will precede the service on Friday from 9:30 until 11 a.m. at the church. Private burial will be held at a later date in St. Catherine’s Cemetery.
The family requests memorials be directed to the Redwood Area Library Foundation. Arrangements are with Nelson-Martin Funeral Service of Redwood Falls.
Vergie Ilene (Trent) Asleson was born March 19, 1920 in Redwood Falls, Minnesota to Floyd and Irene (Spillers) Trent. She resided in Delhi, Minnesota and graduated from Delhi High School in 1937. As an active 4-H club member from the age of nine, Vergie earned numerous ribbons and awards in such categories as canning, food preparation, room decorating, and showing her beloved sheep she raised. In 1938 she was awarded a Servel refrigerator and a scholarship for placing first in the state and second at the National Congress in Chicago for meal planning. She applied her years of 4-H experience and scholarship money towards college and graduated from the University of Minnesota in 1943 with a Bachelor’s of Arts degree in Home Economics.
On May 1, 1943, Vergie married Lt. Paul Asleson at St. Catherine’s Catholic Church in Redwood Falls, and they traveled/lived in various states as determined by his service orders. Following the war and completion of Paul’s optometric education in Chicago, they made their home in Redwood Falls. Here they raised their family and enjoyed sharing activities in their couples’ clubs with lifelong friends. Through the years Vergie maintained her passion for food preparation and was known by both family and friends as a fabulous cook. She was gifted in home decorating; ahead of her time in collecting antiques; an avid gardener who grew and dried her own herbs; a loyal patron of the library; and an artist who dabbled in pottery-making, weaving, and other creative endeavors. She had an interest and eye for the potential of things and the unique.
Vergie was an active member of the local Home-Economics Club, Questers Club, a charter member of Belle Lettres Study Club, and she served as vice president of Federated Clubs of Redwood County. She also belonged to numerous bridge clubs and participated in St. Catherine’s CCW. In 1954 Vergie was secretary of the Ramsey Park Association, and from 1971 to 1980 she functioned as First Lady of Redwood Falls when Paul was mayor. She was devoted to Redwood Falls and proudly patriotic of her country.
Vergie is survived by her three daughters: Betty and Harlan Woelfel of Scottsdale, Arizona; Patricia Tersteeg, Jim Tersteeg of Redwood Falls; and Debra and Lynn Walker of St. Louis, Missouri. Also surviving are “Gigi’s” nine grandchildren: Chris (Chauncey) Woelfel of Seattle, Washington; Mike Woelfel of Portland, Oregon; Heather (Scott) Bidinger of Redwood Falls; Lindsay (Andy) Juntunen of Rogers, Minnesota; Kendra (Ryan) Rebstock of Rockford, Minnesota; BJ (Sheila) Tersteeg of Redwood Falls; Adrienne Walker (Mo Morelli) of San Francisco, California; Whitney (Jarrett) Young of Brunswick, Maine; and Sabrina (Andrew) Impagliazzo of St. Louis, Missouri. Gigi’s fourteen great-grandchildren are: Keegan DeVitis; Boe, Aubrey, Cole, Sophia, and Luke Bidinger; Blake, Alexa, and Brynna Juntunen; Ireland and Brecken Rebstock; Maddigan Tersteeg; Henry Young; and Payton Impagliazzo. Vergie is also survived by her brothers John “Bud” and Bobbie Trent of Mesa, Arizona; and Jerald and Lila Trent of Surprise, Arizona. She was preceded in death by her husband Dr. Paul A. Asleson in 1999.
Vergie’s audacious whimsical spirit, as well as her style and special artistic touches, will be missed by family and friends. Blessed be her memory.
To order memorial trees or send flowers to the family in memory of Vergie Ilene Asleson, please visit our flower store.