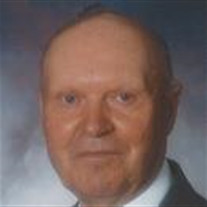 Valeer E. Deprez, the son of Marcel and Anna (Dufloo) Deprez, was born April 22, 1928 in Poperinge, Belgium. He grew up in Belgium and served in the Belgium Army in 1948. Valeer immigrated to the United States in 1952 and worked as a hired man on a farm in Green Valley. He returned to Belgium in 1956.

On November 27, 1956, Valeer married Godelieve M. Leeman in Women, Belgium. The couple came to the United States in 1956, traveling on the ship The Queen Elizabeth. They were dairy and crop farmers near Green Valley in Lyon County and then near Lucan for 30 years. Valeer and Godelieve retired and moved to Redwood Falls in 1996. Godelieve passed away in 1999; Valeer has been a resident of Kingsley Shores in Lakeville for the past year. Valeer had a love for farming, gardening, birds, and animals – particularly his dog, Molly. He was very artistic and loved painting. Valeer was a very generous individual. In his retirement, he enjoyed spending time on the farm and watching the crops grow. He and Godelieve were members of Our Lady of Victory Catholic Church in Lucan and their children all attended Our Lady of Victory school. When they retired to Redwood Falls, they became members of St. Catherine’s Catholic Church.

Blessed be his memory.
To order memorial trees or send flowers to the family in memory of Valeer Deprez, please visit our flower store.