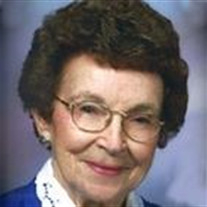 Thelma Agnes Lindeman, the daughter of Linus and Hilda (Bartholome) Mertz, was born October 15, 1920 in Houghton, South Dakota. She grew up in Houghton and received her formal education in the local schools. Following high school, Thelma earned her teaching certificate from Lamberton Teacher’s College and taught country school in Redwood County.

On June 16, 1945, Thelma married Warren Lindeman at the New Avon Salem Evangelical United Brethren Church. The couple lived and farmed in New Avon Township for 64 years. Following Warren’s death in 2006, Thelma remained on the farm for a time and then moved to Redwood Falls in 2009. Thelma served faithfully as the organist and pianist at New Avon Salem Church “on the hill” for nearly 50 years. After the church closed, Thelma and Warren became members of the Redwood Falls Evangelical Free Church and she occasionally played the piano and organ there. Thelma loved gardening, taking care of her roses and orchards, sewing, quilting and cooking. She also loved watching and feeding the birds. Thelma’s life centered around her God and her family. She loved spending time with her children and grandchildren. Thelma and Warren enjoyed many trips together, especially to Alaska.

She was preceded in death by her husband Warren, grandson Adam Diehl, three brothers and four sisters.

Blessed be her memory.
To order memorial trees or send flowers to the family in memory of Thelma Agnes Lindeman, please visit our flower store.