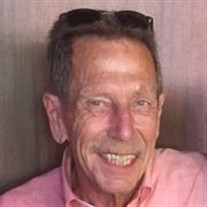 Stephen D. Rivard Jr., age 73, of Redwood Falls died Tuesday, December 15, 2020 in his home surrounded by his family. Stephen fought a courageous battle against cancer. A visitation will be held from 4:30 p.m. until 7 p.m. on Sunday, December 20, 2020 at Nelson-Hillestad Funeral Home in Redwood Falls, with prayer service at 7 p.m. Burial will be held at a later date in the Fort Snelling National Cemetery.

Stephen Donald Rivard, Jr. was born May 2, 1947 to Stephen and Evelyn (Paulson) Rivard in New Richmond, Wisconsin. He grew up on the family farm with his 3 sisters and a brother. Upon high school graduation, Steve enlisted in the Navy and served in Vietnam as a beach jumper. After an honorable discharge from the Navy, he spent the next several years doing what he loved, working, hunting, fishing, and riding his motorcycle across the country. He eventually rode that motorcycle to Redwood Falls, MN where he spent his 44-year career in various managerial roles at Daktronics, Artesyn, Emerson, Zytec, MPI and Control Data (all in the same building!). In Redwood Falls, he also met his loving wife, Ceil, they married in 1984. It was then he decided he better trade in his motorcycle for a more family friendly car and a riding lawnmower. Steve relished his roles as husband, father to his four children, Toni (Greg), Stacy (Bob), Brak (Kelly), and Abby (Garrett) and especially cherished his role as Papa Steve to Ellery, Presley, Cooper, Archer, Roman, Piper and Macklin. You would often find him rolling around on the floor playing with them, or spending hours giving them lawn mower rides, hearing in the background, “my turn, Papa Steve, my turn!” Steve’s friends and family would describe him as a thoughtful, critical thinker who was a man of few words, but the words he chose to speak were always relevant and meaningful. He mentored many throughout his career and will be greatly missed by all those who were lucky enough to know him.

He is survived by his wife of 36 years, Ceil and their four children, seven grandchildren, his siblings, Sharon DeJongh of WI, Sharlene Peterson of MN, Sheila Stelzer of AZ and Stuart (Diane) Rivard of WI, and many nieces and nephews.

Blessed be his memory.
To order memorial trees or send flowers to the family in memory of Stephen D. Rivard Jr., please visit our flower store.