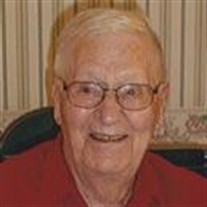 Stanley Willard Kindler, the son of John and Isabelle (Pederson) Kindler, was born June 8, 1923 in Charleston Township, Redwood County. He was baptized September 16, 1923 at the Evangelical Lutheran Church in Lamberton and confirmed as an adult at Sharon Lutheran Church in Lamberton. Stan grew up in the Lamberton area and received his elementary education there. On November 10, 2000, he was awarded his honorary G.E.D. at Redwood Valley High School.

On June 9, 1942, Stan enlisted in the United States Marine Corp. He participated in action against the enemy at Tarawa Atoll, Gilbert Islands in November 1943, and the Saipan Marianas Islands and Tinian Marianas Islands during the summer of 1944. Stan served in the Asiatic Pacific Area from October 1942 to January 1945. He was honorably discharged in October 1945.

On May 30, 1945, Stan married LouElla Roberts at the Fort Snelling Chapel in Minneapolis. Following his discharge from the service, the couple made their home in Redwood County. Stan drove egg truck for Robinson Hatchery in Sanborn. The Kindler’s built their home in Lamberton where he did truck driving and dozing for Vernon Theis Stockyards. In the 1950s, Stan drove school bus and did janitorial work for the Lamberton School District. The family moved to Eugene, Oregon in the Fall of 1960 and later moved back to Minnesota and lived in Echo where Stan worked at Varpness John Deere. In 1965, he began working for Anderson John Deere in Redwood Falls where he was employed until retiring in 1989. Stan became a resident of Sunwood Good Samaritan Care Center in October 2009.

He enjoyed his family and friends. Stan’s outgoing and jovial personality endeared him to many. He was a very active outdoorsman; he and LouElla loved camping and traveling together and with their family. They taught their children the value of family and American history and of honoring those who volunteered to preserve our freedoms in the Armed Services. Stan and LouElla, along with Gary Revier, were instrumental in the establishment of the veteran’s memorial in Redwood Falls.

Blessed be his memory.
To order memorial trees or send flowers to the family in memory of Stanley Willard Kindler, please visit our flower store.