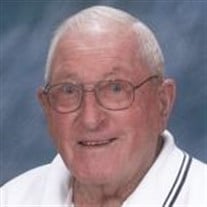 Stanley P. Heins, 87, of Redwood Falls died Saturday, April 5, 2014 while at Immanuel-St. Joseph Hospital in Mankato. Funeral services will be held at 7 p.m. on Thursday, April 10, 2014 from Nelson-Martin Funeral Home for those in the Redwood Falls area; and then at 11 a.m. on Friday, April 11, 2014 from Oronoco Presbyterian Church, Oronoco, Minnesota (north of Rochester). Burial will follow in the Oronoco Cemetery. Visitation will be held Thursday, April 10, from 5 until 7 p.m. at Nelson-Martin Funeral Home in Redwood Falls and will continue on Friday at the church in Oronoco for one hour prior to services.

Stanley Phillip Heins, the son of Myrtle L. Heins, was born September 26, 1926 in Rochester. On August 31, 1946, he married Phyllis Y. Sykes and they made their home in the Pine Island and Zumbrota area for 19 years. During that time, Stanley worked for Goodhue County REC as a lineman and Power Use Advisor. In 1965, they moved to Wadena where he taught Electrical Lineworker Training at the vocational school until his retirement in 1989.

During the summer of 1976, Stan and Phyllis moved into the house they built on Long Lake near Park Rapids. When not teaching Stan enjoyed wood working, latch hood rug making, camping and traveling – but most of all he liked to stay busy. In the summer of 2002 they moved to Redwood Falls to be closer to family.

Stanley is survived by his children Kenneth and Sharon Heins of Pompton Plains, New Jersey, Pamela and Richard Kesteloot of Marshall, Donald and Sharon Heins of Waikoloa, Hawaii, and Charles and Marlene Heins of Redwood Falls; grandchildren Keith Heins, Robin Heins, Korey and Melissa Kesteloot, Wade and Tara Kesteloot, and Matt and Robin James; five great-grandchildren; and many cousins, nieces, nephews and other relatives. He was preceded in death by his wife Phyllis in 2007, and his mother Myrtle in 1986.

Blessed be his memory.
To order memorial trees or send flowers to the family in memory of Stanley Phillip Heins, please visit our flower store.