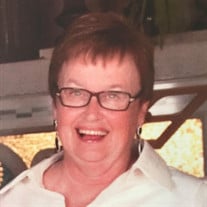 Sharon “Sherry” Mace, age 72, of Willmar, died on Friday, August 30, 2019 at Bethesda Nursing Home in Willmar, Minnesota. Memorial Mass Service will be held at 11 am on Saturday, September 7, 2019 at St. Catherine’s Catholic Church in Redwood Falls, with burial to follow in the St. Catherine’s Catholic Cemetery in Redwood Falls. Visitation will be held from 10 am until time of services at 11 am on September 7, 2019 at the church.

Sherry Mace was born December 2, 1946 in Mankato, Minnesota to Jay Nathan and Mary (Gilronan) Mace. She grew up in Belview attending Belview Schools graduating from Belview High School in 1964. She lived in Belview, Redwood and Willmar for most of her live and worked as a journalist for the Mirror and Gazette Newspapers for many years. She was a member of St. Mary’s Catholic Church in Willmar.

She fought the good fight, always cheered for the underdog, loved a good political debate and never had an opinion she felt like she shouldn't share. An award-winning journalist named by the Minnesota Newspaper Association. Sherry sought out stories about real issues that were meaningful to the small rural communities she wrote about. In her early career as a journalist, she was praised by then Vice President, Walter Mondale for her work to bring awareness to issues pertaining to civil rights and equality in small town Minnesota. She was a humanist who believed social justice was a prerequisite to peace and happiness for the greatest number and saw it a moral failing to stand by while others were denied basic needs and human rights. She worked hard to help a variety of local nonprofits achieve their mission of creating a better community for all and she honored her core values throughout her professional and personal life, by advocating for issues regarding poverty, homelessness, and hunger.

Sherry was an active and loyal member of the Kandiyohi County DFL. She enjoyed driving local candidates in summer parades during both local and state election times. She volunteered at many community dinners during the holidays to serve others who may not have anywhere else to go. She looked forward to Wednesday nights when she would get together with her beloved Knit Whits and knit for hours. She was a ferocious reader with a particular interest in mysteries. Her laugh was loud and contagious. She loved the theater and the arts, but she never missed a family sporting event and loved to watch the Minnesota Twins, Vikings, and some of her other favorite professional athletes such as Rodger Federer, Serena Williams, Tiger Woods, and Jack Nicklaus compete.

An old-fashioned hippie at heart, material possessions were not of high priority and somewhere along the way she convinced herself that a tidy house was a sign of a wasted life.
Her family was her most prized possession. She spent years researching her German-Irish heritage and putting together family tree information. She believed firmly in having strong foundational roots, but wanted nothing more than for all her family, including her nieces, nephews, and her grandchildren, Amelia and Charlotte, to spread their wings and use the talents they were given to go out into the world and make it a better place than how they found it.

Her legacy will live on through her family and friends. She taught us to stand strong, believe that nothing is impossible, be gracious in all that you say and do, and always give more than you receive. She was one of a kind, we miss her dearly already.

Sherry is survived by her daughter Kelly Tauber and husband Aaron and their two daughters Amelia and Charlotte Tauber of Willmar, and her three brothers; Barry Mace (Diana) of Crosby, MN, Shawn Mace of Moorhead, and Mahlon Mace of Redwood Falls. She was preceded in death by her parents and her brother Brad.

Blessed be her memory.
To order memorial trees or send flowers to the family in memory of Sharon "Sherry" Mace, please visit our flower store.