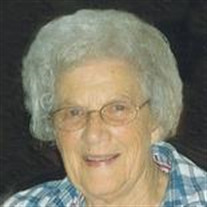 Ruth E. Schmidt, 90, of Sleepy Eye and formerly of Morgan died Thursday, June 19, 2014 at Sleepy Eye Care Center. Mass of Christian Burial will be held at 10:30 a.m. on Monday, June 23, 2014 from St. Michael’s Catholic Church in Morgan with burial to follow in the church cemetery. Visitation will be held Sunday, June 22, 2014, from 5 until 7 p.m., with a prayer service at 7 p.m., all at Nelson-Martin Funeral Home in Morgan. Visitation will continue on Monday at the church for one hour prior to services.

Ruth Evelyn Schmidt, the daughter of William and Florence (Kuelbs) Hale, was born November 6, 1923 in Eden Township, Brown County, Minnesota. When Ruth was a toddler, she moved with her family to a farm in the Minnesota River Valley near Hale Bridge. She grew up on this farm and received her formal education at Grass Valley District 16 school.

On June 6, 1950, Ruth married Lawrence W. Schmidt and they settled on their farm near Morgan. Ruth was a full-time homemaker, wife and mother. In her spare time, she especially enjoyed flower gardening. Ruth and Lawrence retired from farming in 1981 and moved into Morgan. Lawrence died in 2005 and, in 2013, Ruth moved to Sleepy Eye. While living in Sleepy Eye Ruth enjoyed spending time with her sisters.

Ruth was a member of St. Michael’s Catholic Church and St. Anne’s Altar Society. She was also a lifetime member of the V.F.W. Auxiliary where she was past president, secretary and treasurer. Ruth volunteered many hours at Gil-Mor Manor and with the Red Cross Bloodmobile. She also delivered Meals on Wheels for several years.

Blessed be her memory.
To order memorial trees or send flowers to the family in memory of Ruth E. Schmidt, please visit our flower store.