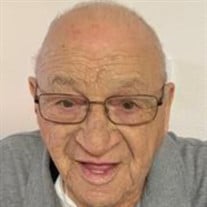 Russell James Welsch was born February 3, 1930 to Anton and Bertha (Suess) Welsch in the family home in Springfield MN. He attended school through grade 6 at St Raphael's Catholic school in Springfield. At that time, he left school to begin work for area farmers to assist the family with financial needs. At the age of 18 he worked in South Dakota building electrical lines. He enlisted in the US Army in 1951 and was honorably discharged in 1953. He returned to the Clements MN and began employment with the Redwood Electric Association and continued that employment for 25 years. On October 20, 1956, he married Helen H. Schuette at St. Peter and Paul’s Catholic Church in Glencoe, Minnesota. After their marriage they made their home in Clements, Minnesota. During his life in Clements, he was active in The American Legion, serving as the post Commander for a year, St. Joseph's Catholic Church, the Cements Volunteer Fire Dept. and Clements City Council Russ and Helen moved to their home in Redwood Falls on December 14, 2014.

Russ's faith was a very important part of his life, as were his children, grandchildren, great grandchildren and nieces and nephews. Russ enjoyed life to the fullest, he and Helen had many special moments in their life together. They enjoyed weekend visits with family and friends, card parties with friends, summer camping trips, their 25th Wedding Anniversary trip to Hawaii and later, their summer place on Lake Mary, where he was fondly known as “the fix-it guy”. He enjoyed fishing, Pheasant hunting and deer hunting, visit with “the boys” as he referred to his Clements buddies and his Wednesday night “Family Happy Hour” with Helen, Jim and Lynn. Russ was the guy who could sit and have a conversation with anybody! His sense of humor, smile and quick wit will be missed by all.

Blessed be his memory.
To order memorial trees or send flowers to the family in memory of Russell James Welsch, please visit our flower store.