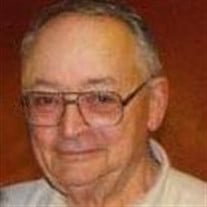 Russell M. Swigart, 91, of Redwood Falls passed away unexpectedly on Sunday, November 8, 2020 at Garnette Gardens in Redwood Falls, Minnesota. A Private Family Graveside Service to be held at Crestlawn Memorial Gardens of Redwood Falls. A Celebration of Life will be scheduled next spring to include extended family and friends.

Russell and Loree worked on together on the farm and raising their 5 children. Russell was known for his very large vegetable, fruit and flower gardens, orchard and his green house. He and Loree enjoyed the many traveling destinations over the years. Russell enjoyed woodworking, as many of those close to him have items he has made over the years. He was always busy doing something.

Russell was also active in the communities as a member of Cornerstone Christian Church of Redwood Falls, Past Pork Producers President, Board of Directors of Harvestland in Morgan, New Ulm Gem & Mineral Club and a board member of Paxton Township.

He was preceded in death by his parents Mac and Edna Swigart, his loving wife of 57 years, Loree and his brother, William Swigart.

The family prefers memorials to the Youth Program at Cornerstone Christian Church of Redwood Falls.

Blessed be his memory.
To order memorial trees or send flowers to the family in memory of Russell Mac Swigart, please visit our flower store.