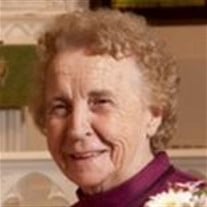 Ruby Jensen, 91, of Clearbrook died Saturday, August 2, 2014 at Good Samarian Center in Clearbrook. Funeral services will be held at 1 p.m. on Thursday, August 7, 2014 from Nelson-Martin Funeral Home in Redwood Falls with burial to follow in the Dannabod Brookville Cemetery, Brookville Township, Redwood County. Visitation will be held on Thursday from 11 a.m. until 1 p.m. at the funeral home.

She is survived by her children Barbara (Bob) Forster of Park Rapids, Michael (Lorraine) Jensen of Bagley, and Rita (Bob) Westrum of Clearbrook; daughter-in-law Sherrie Evans of Black Diamond, Washington; brother Rodney (Joan) Rasmussen of Shakopee; numerous grandchildren and great-grandchildren; one great-great-grandchild; and many nieces and nephews.

Blessed be her memory.
To order memorial trees or send flowers to the family in memory of Ruby May Jensen, please visit our flower store.