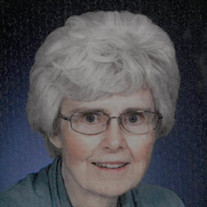 Rosemary McGraw, 86, of Franklin died Sunday, July 25, 2021, at her home in Franklin, Minnesota. Mass of Christian Burial will be held at 10:30 a.m. on Saturday, July 31, 2021, St. Michael’s Catholic Church in Morgan. Burial will be held at 3 p.m. Saturday at the Credit River Catholic Cemetery, rural Prior Lake, Minnesota. Visitation will be held Friday, July 30, 2021, from 4 until 7 p.m., with a prayer service at 7 p.m., at Nelson-Hillestad Funeral home in Morgan.

Rosemary McGraw, the daughter of John and Margery (Cavanaugh) Hanrehan, was born July 27, 1934, in St. Paul, Minnesota. Rosemary grew up Credit River Township near Prior Lake, where she graduated from Lakeville High School. In 1955 she received her bachelor’s degree from the College of St. Catherine. After graduation she taught high school for a number of years.

Rosemary and Rollie lived in Stewart after their marriage until 1974 when they made their home in Franklin, Minnesota. Rosemary was an active member of the Sacred Heart Catholic Church in Franklin until it’s closing in 2020, when she became a member of St. Michael’s Catholic Church in Morgan. She played the organ for Sacred Heart and was a member of the CCW. She enjoyed being part of the Renville County Historical Society and Franklin Women’s Civic Club. For many years she served on the school boards of Franklin and Cedar Mountain Schools.

She was preceded in death by her husband, Roland “Rollie” McGraw on September 29, 2014.

Rosemary was a devoted wife, mother, grandmother, and great-grandmother. She will be missed by many.
To order memorial trees or send flowers to the family in memory of Rosemary McGraw, please visit our flower store.