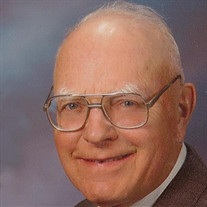 Ronald Earl Sawvell, age 94 of Clements, died on Friday, December 27, 2019. Funeral Services will be held at 11 am on Saturday, January 4, 2020, at the Evangelical Free Church of Redwood Falls. Burial, with Military Honors, will follow in the New Avon Salem Cemetery. Visitation will be from 10 am until 11 am on Saturday, January 4, 2020 at the church.

Ron, the son of Fred and Doris (Dodge) Sawvell, was born on December 2, 1925, at Chippewa Falls, Wisconsin. He was raised on the family farm in Wisconsin and attended a country school in Hawley Township, graduating from Chippewa Falls High School in 1943.

Ron entered the Army on May 20, 1944, serving with the 1st Calvary Division in the Philippians and the occupation of Japan. Ron was honorably discharged on May 13, 1946. After leaving the service, he came to Clements where his sister, Olive and her husband, Elmer, owned and operated the local hardware store. He became employed there as an electrician for a number of years before starting his own business, Sawvell’s Feed & Seed, in 1950. Ron married Lorraine Dahmes at the New Avon Salem United Methodist Church on July 5, 1952.

As owner and operator of Sawvell’s Feed & Seed, he became very well-known to many farmers and seed growers. During the ensuing years he was the recipient of several awards, among them the Mr. Crop Improvement Award in 1973 and the Premier Seed Grower Award in 1986. He also held various offices, including church treasurer, Sunday school treasurer, director and treasurer of the MN Seed Producers and Promotion Association, director on the Clements Federal Credit Union Board and was one of the original owners of Gold Country Seed.

Ron loved working in the feed and seed business and enjoyed interacting with many people he came in contact with as a result. In addition, he spent many years working the land on the family farm and found it especially satisfying to be involved in keeping the property well cared for and productive. He was well-known for his honesty and integrity in his dealings with others.

He was preceded in death by his parents, a sister and husband; Olive and Elmer Roadfeldt, brother-in-laws: Richard Fox and Jerry Allenspach.

Blessed be his memory.
To order memorial trees or send flowers to the family in memory of Ronald E Sawvell, please visit our flower store.