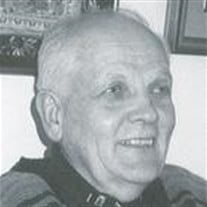 Rolland “Rollie” McGraw, 83, of Franklin passed away peacefully on the Feast of St Michael, Monday September 29, 2014. Mass of Christian Burial will be held at 10:30 a.m. on Thursday, October 2, 2014 from Sacred Heart Catholic Church in Franklin. Military honors will follow at the church. Burial will be held at 3 p.m. on Thursday at the Credit River Cemetery, rural Prior Lake. Visitation will be held on Wednesday, October 1, 2014, from 4 until 8 p.m., with a 4 p.m. Knights of Columbus Rosary and 7 p.m. prayer service, all at the Nelson-Martin Funeral Home in Morgan. Visitation will continue at the church on Thursday for one hour prior to services.

Rollie was an excellent athlete participating in basketball, baseball and football at Stewart High School in Stewart. Rollie and Bob both enlisted in the U.S. Navy after graduating from high school, attending boot camp in Great Lakes, Illinois. Rollie was a Navy medic at the Boston Chelsea Navy Hospital. They both served on the USS Tanner and the USS Tidewater and were in New York, Puerto Rico, Greenland, Cuba and the Virgin Islands until 1954. After leaving the Navy, Rollie began his career in the U.S. Postal Service in Stewart.

Rollie became the Postmaster of Franklin in 1973 where he worked until he retired in 1999. Rollie was interested in the history of Ben Franklin – who was the 1st Postmaster of the United States – and was well known for his portrayal of Ben Franklin, appearing in the Catfish Derby Days parade as well as numerous other festivals and parades. Rollie was named “Postmaster of the Year” in 1998. He was very active in the Lions Club, serving as its President for two years. He was a member of the Knights of Columbus, 3rd degree, joining in 1957. He was on the Board of Directors of the Renville County Historical Society and was a proud member of the American Legion for over 50 years.

Rollie was known for and will be remembered for his knowledge and passion for gardening, healthy eating, attending his grandchildren's sporting events, his Irish wit and devout Catholic faith. He was into organic food and antioxidants decades before they became mainstream. Rollie was a devoted husband, father and grandfather and will be missed by many.
To order memorial trees or send flowers to the family in memory of Rolland "Rollie" John McGraw, please visit our flower store.