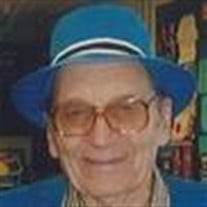 Roland “Rolly” Dahmes, 91, of New Ulm and formerly of Redwood Falls died Saturday, January 10, 2015 at Prairie Senior Cottages in New Ulm. Funeral services will be held at 10:30 a.m., on Saturday, January 17, 2015 from Nelson-Martin Funeral Home in Redwood Falls with burial to follow in New Avon Salem Cemetery, rural Wabasso. Visitation will be held at the funeral home on Friday, January 16, 2015, from 4 until 7 p.m., and will continue on Saturday from 9:30 until 10:30 a.m.

Roland William Dahmes, the son of William and Lydia (Schroeder) Dahmes was born January 30, 1923 on the family farm southwest of Redwood Falls. He grew up on the family farm and received his elementary education in the nearby country school. Rolly graduated from Redwood Falls High School and then farmed with his father. When the United States entered World War II, Rolly moved to California where he joined the war effort, working at Douglas Aircraft Company in Long Beach. There he became acquainted with fellow employee Virginia Finfrock.

Roland and Virginia were married November 18, 1944 at the Presbyterian Church in Long Beach. As Rolly was by then serving in the United States Army Air Force, they moved to El Paso, Texas where he was stationed; the couple’s first child, Suzanne, was born there. Following the war, the couple returned to the Dahmes farm near Redwood Falls, where their second daughter Sandi was born. In the early 1950s, they moved to Richfield where Rolly earned a bachelor’s degree in English Literature from Bethel College. While a student at Bethel, their first son Kenn was born. Following his graduation from college, the family moved back to Redwood County to farm. Their third daughter Ginifer and second son Steve were born here. In 2006, Roland Virginia retired and moved into Redwood Falls; about a year later they relocated to Sleepy Eye and then to New Ulm. In addition to farming, Rolly was one of the first greeters at the brand new Wal-Mart store in Redwood Falls and is fondly remembered by many. He was a member of Harvest Baptist Church in Redwood Falls.

He was preceded in death by his parents; his wife Virginia on July 6, 2012; brother and sister-in-law Melbourne and Leona Dahmes; sister and brother-in-law Shirley and Bob McIntire; and many cousins.

In loving memory.
To order memorial trees or send flowers to the family in memory of Roland "Rolly" William Dahmes, please visit our flower store.