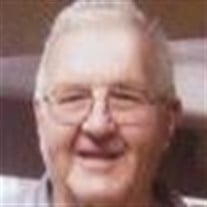 Roger Schmit, 74, of Jamestown, North Dakota and formerly of Redwood Falls, Minnesota, died Saturday, February 24, 2018 at Aneta Parkview Nursing Home in Aneta, North Dakota. Memorial Services will be held at 11 a.m. on Saturday, March 3, 2018 from St. Catherine’s Catholic Church in Redwood Falls with burial to follow in the church cemetery. Visitation will be held at the church on Saturday, March 3, from 10 until 11 a.m.

Roger Daniel Schmit, the son of John and Ann Marie (Hammerschmidt) Schmit, was born January 20, 1944 in Redwood Falls. He grew up on a farm and graduated from Redwood Falls High School in 1962. Roger spent most of his adult life working construction around the Jamestown area.

Roger is survived by his brother Jerome (Mary) Schmit of Redwood Falls; sister-in-law Harriet Schmit of Springfield; and nieces and nephews. He was preceded in death by his parents, brother Lavern Schmit and sister Connie Schrode.

Blessed be his memory.
To order memorial trees or send flowers to the family in memory of Roger Schmit, please visit our flower store.