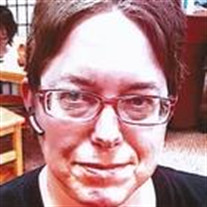 Roberta “Bert” M. Buetow, 47, of Montevideo and formerly of Sanborn and Redwood Falls died Tuesday, February 16, 2016, as the result of a massive stroke, at St. Cloud Hospital. Funeral services will be held at 10:30 a.m. on Saturday, February 20, 2016 from Nelson-Hillestad Funeral Home in Redwood Falls with burial to be held at a later date. Visitation will be held on Saturday, from 9:30 until 10:30 a.m., at the funeral home.

Roberta Marie Buetow, the daughter of Duwayne and Rosemary (Hole) Pratt, was born September 20, 1968 in Iowa City, Iowa. As a young child, she moved with her parents to the Redwood area. Bert received her elementary education in Redwood Falls and graduated from Wabasso High School in 1988. She later earned her CNA certification from Minnesota West Technical College in 2014.

Bert was married to Myron “Mike” Buetow. He preceded her in death. Bert was a homemaker for much of her adult life; for the past year and a half, she had been employed by McFarland Hanson, Inc.

Bert is survived by her special friend Al Bauer of Montevideo; her son William Buetow of Sanborn; her father; and her brother and sister-in-law Doug and JoAnn Pratt of Kalona, Iowa. She was preceded in death by her husband, mother, and her brother James Pratt.

Blessed be her memory.
To order memorial trees or send flowers to the family in memory of Roberta Marie Buetow, please visit our flower store.