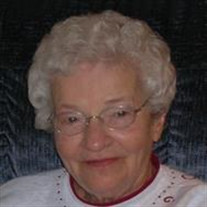 Rita Mahoney, 95, of Redwood Falls and formerly of Morton died Sunday, May 10, 2015 at Methodist Hospital in St. Louis Park, Minnesota. Mass of Christian Burial will be held at 11 a.m. on Thursday, May 14, 2015 from St. John’s Catholic Church in Morton with burial to follow in the church cemetery. Visitation will be held on Wednesday, May 13, 2015, from 5 until 7 p.m., with a prayer service at 7 p.m., all at St. John’s Catholic Church. Visitation will continue at the church on Thursday from 10 until 11 a.m.

Rita Ann Mahoney, the daughter of Michael and Celestine (Huebsch) Posl, was born June 13, 1919, the sixth child of 12, on the family farm near Bird Island. She was raised on the farm and received her elementary education in the nearby rural school. Rita then attended Catholic school through the ninth grade. Later, she worked as a waitress at a café in Bird Island.

On Thanksgiving Day, November 27, 1941, Rita married Edward Thomas Mahoney at St. Mary’s Catholic Church in Bird Island and they farmed near Morton. Rita was a homemaker, farmwife and, first and foremost, a wife and mother. She enjoyed quilting, crocheting, baking and working in her large garden. Rita also worked as a cook at the Hilltop Café. She was an active member of St. John’s Catholic Church through her 80s. Rita enjoyed the activities at Garnette Gardens and spending time with her friends.

Blessed be her memory.
To order memorial trees or send flowers to the family in memory of Rita Ann Mahoney, please visit our flower store.