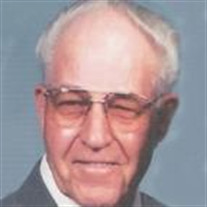 Reynold Jacobsen, 92, of Morgan died Thursday, June 11, 2015 at Gil-Mor Manor in Morgan. Funeral services will be held at 10:30 a.m. on Tuesday, June 16, 2015 from St. Matthew’s Lutheran Church in Evan. Burial, with full military honors will follow at the Danebo/Brookville Cemetery. Visitation will be held on Monday, June 15, 2015, from 5 until 8 p.m., at Nelson-Hillestad Funeral Home in Morgan and will continue on Tuesday at the church for one hour prior to services.

Our Savior Jesus Christ has destroyed death and brought life and immortality to light through the Gospel. Let us remember with thanksgiving what God has done through His faithful servant Reynold Peter Jacobsen, beloved husband, father, father-in-law, grandfather, great-grandfather, uncle, and friend.

Reynold Peter Jacobsen was given life by his Creator on October 1, 1922, on the family farm in Brookville Township, Redwood County. He was the son of Wilhelm Jacobsen and Anna Elena Johanna Nielsen. Reynold was baptized and confirmed at St. Matthews Lutheran Church, Evan; he graduated from Morgan High School in 1940. Reynold enlisted in the U.S. Army and, during World War II, served honorably in the fighting in the Pacific Theatre.

On June 10, 1948, Reynold married Else Kirstine Andersen at Evan, in a joint ceremony with Arthur and Florence (Andersen) Henriksen. Reynold and Else were blessed with four children. Reynold farmed in Brookville Township for over 55 years; he was a good steward of his land and resources. He served on the Morgan School Board for many years, including several as chairman. Reynold belonged to the Toastmasters and, for 17 years, was president of the Gil-Mor Manor association. He was an active member of St. Matthew’s Lutheran Church where he held the offices of council president and secretary. Reynold belonged to the Couples’ Club and Bible study groups. He served as a Sunday school teacher and was a member of the church choir for over 55 years.

Reynold was a life-time member of the Veterans of Foreign Wars (V.F.W.). His pride in his military service evidenced itself in his service for over 20 years on the Color Guard, which presented the colors and flags at many funerals for area veterans, and as V.F.W. Commander. A United States flag flew over the farm. Reynold gave generously of himself to his family, church, and community. His faith guided him throughout life.

Reynold was preceded in death by his parents; and his siblings Dyma Johnson, Elsie Mertz, and Richard Jacobsen.

God welcomed Reynold home on June 11, 2015, to rest in the arms of Jesus to await the resurrection of the dead. The Lord gives, and the Lord takes away; blessed be the name of the Lord.
To order memorial trees or send flowers to the family in memory of Reynold Peter Jacobsen, please visit our flower store.