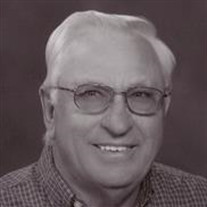 Raymond Henry Seifert, the son of Joseph and Rosa (Guldan) Seifert, was born March 11, 1931 on the family farm in Brookville Township, Redwood County. He grew up on the farm and received his formal education in the nearby country school. Following his schooling, Ray worked on the family farm. He was inducted into the United States Army on November 25, 1952 and served as a Military Policeman during the Korean War. Following his honorable discharge from active military service on October 20, 1954, Ray returned to the family farm. Ray was discharged from the Army Reserves on October 31, 1960.

On October 17, 1961, Ray married Violet Platz at St. Raphael’s Catholic Church in Springfield. They lived and farmed in Morgan Township where Ray raised feeder pigs and sheep. As the flock of sheep was up to 500 strong, Ray spent many a night in the barn during lambing season! He also grew peas and corn for DeMonte and, when he retired, had grown for them for 35 years – at that time the longest any farmer had raised vegetables for them. Ray was a member of St. Michael’s Catholic Church where he served as an usher. He was a lifetime member of Sherman-Bohn VFW Post 5771 in Morgan.

Ray enjoyed wood working and made many birdhouses and wooden toys. He also liked doing jigsaw puzzles and word search puzzles. In his younger years, Ray enjoyed sketching and, when his children were growing up, took them bullhead fishing every Sunday after church. He had a strong work ethic and often told his children “if you want something you work for it.”

Blessed be his memory.
To order memorial trees or send flowers to the family in memory of Raymond "Ray" Henry Seifert, please visit our flower store.