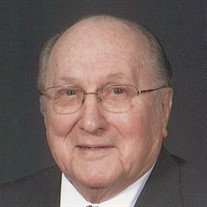 Raymond “Ray” L. Muchlinski, 93, of Redwood Falls died peacefully at his home the evening of Monday, August 11, 2014. With him were his loving wife, Lucille, and their daughter, Marsha. Mass of Christian Burial will be held at 11 a.m. on Friday, August 15, 2014 from St. Catherine’s Catholic Church in Redwood Falls. Military honors will follow the Mass; burial will be held later in the day at St. Peter and Paul Catholic Cemetery, Ivanhoe. Visitation will be held Thursday, August 14, 2014, from 4 until 7 p.m., with a prayer service at 5 p.m. followed by Knights of Columbus Rosary, all at Nelson-Martin Funeral Home in Redwood Falls. Visitation will continue on Friday at the church for one hour prior to services.

Raymond L. Muchlinski, the son of John L. and Elizabeth (Lipinski) Muchlinski, was born November 24, 1920 in Ivanhoe. He attended Ivanhoe High School and graduated in 1938. Ray then attended the Ivanhoe Normal Training School and graduated in 1939. He taught in Lincoln County rural schools from 1939 to 1942. On June 26, 1942, Ray enlisted in the United States Navy and he served at various Naval Air Stations and on a naval aircraft carrier in the Pacific Theatre. He was honorably discharged from the Navy on February 2, 1946. Following his discharge, Ray attended South Dakota State University in Bookings, S.D. where he graduated in the summer of 1949 with a Bachelor of Science degree in Civil Engineering.

Ray’s life was devoted to his God, his wife and his family. He was a kind and loving husband and dad.

Ray had many and varied interests during his life. He became quite accomplished in oil painting, wood working, and wood carving. He was also an avid gardener and wine maker. Ray enjoyed traveling with his family when they were younger and he continued his travels with the love of his life, Lucille, in their retirement years. He took great pride in being a devotee of locating and collecting pictures of historical covered wooden bridges. Ray was very proud of his heritage in that he was a first generation Polish American; he loved studying his family tree.

Most important in Ray’s life was his great love for his entire family. He spent his married life devoted to his wife, Lucille, and his daughters and son. He later became a doting and loving grandfather and was extremely proud of his grandchildren. Ray is survived by his wife, Lucille; daughters Marsha (Jim) Culhane of Marshall, and Gail Wood of Minneapolis; son Robert (Mary) Muchlinski of Hudson, Wisconsin; grandchildren Sean, Ryan, and Kyle Culhane, Rachael Wood, Leah St. Ores, and Joseph and Martha Muchlinski; and many nieces and nephews. He was preceded in death by his daughter Linda St. Ores, his parents, a brother Lucian and wife Alma, a brother Floyd and wife Frances, and a sister Bertha Popowski.

Blessed be his memory.
To order memorial trees or send flowers to the family in memory of Raymond "Ray" L Muchlinski, please visit our flower store.