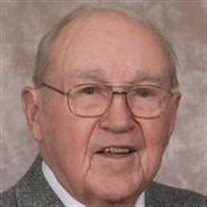 Raymond Lester Gelinne, the son of Hector and Freda (Dupont) Gelinne, was born March 20, 1915 in Rhinelander, Wisconsin. He grew up in Rhinelander and received his formal education there, graduating from Rhinelander High School in 1933. Following graduation, Ray worked for Rhinelander Refrigeration Company, which made ice boxes. In 1934, he began his career with Montgomery Ward department store, where he worked until retiring in 1978.

On April 10, 1939, Ray married Lois Susan Kofka at St. Mary’s Church in Rhinelander. They had two sons, James and Thomas. Ray’s job soon moved the family to St. Cloud and then to Owatonna, where he was promoted to store manager. In February 1944, Ray was inducted into the United States Army. He served with the 286th Combat Engineering Company in England, Germany, France, Belgium and Austria and fought in the Battle of Colmar, which liberated Alsace. Ray was honorably discharged in February 1946 and returned home to continue his employment with Montgomery Ward. He worked at stores in Antigo, Wisconsin; Sault Ste. Marie, Michigan; La Crosse, Wisconsin; Redwood Falls; New Ulm; and Sioux Falls, South Dakota. Ray’s longest service was as store manager in Redwood Falls from 1951 until the store closed in 1973.

Ray was a member of St. Catherine’s Catholic Church in Redwood Falls where he served as a lector and an usher for many years. He belonged to the United Senior Center and served as board member and as president from 1998 until 2001. Ray was a life-time member of the Veterans of Foreign Wars and the American Legion. His hobbies included fishing – especially ice fishing, wood working, traveling, Bingo, a daily Manhattan, and “cheating at cards.”

Blessed be his memory.
To order memorial trees or send flowers to the family in memory of Raymond Lester Gelinne, please visit our flower store.