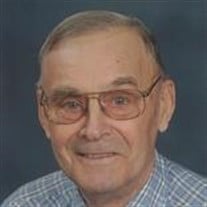 Philip T. Wenner Sr., 84 of Morgan, died Friday, October 3, 2014 in Methodist Hospital in St. Louis Park, Minnesota. Mass of Christian Burial will be held at 10:30 a.m. Thursday, October 9, 2014 from St. Michael’s Catholic Church in Morgan with burial to follow in the church cemetery. Visitation will be held from 4 until 8 p.m. Wednesday at the Nelson-Martin Funeral Home in Morgan and continue Thursday at the church for one hour prior to services. There will be a parish prayer service Wednesday evening at 7:30 p.m. at the funeral home in Morgan.

Arrangements are with the Nelson-Martin Funeral Service of Morgan. E-mail condolences may be sent via www.nelsonmartinfuneralservice.com .

Philip Thomas Wenner was born Sunday, October 13, 1929 in Royalton, Minnesota to Leo T. and Gladys (Reinhardt) Wenner. He grew up in the Royalton area attending school there graduating from Royalton High School in 1947. Philip spent time sailing the Great Lakes from 1952 – 1955 on U.S. Steels ships Isaac L. Ellwood and the J.F. Duison. He worked as a coal passer and then as an oilman on the steam engines of the ships until ending his sailing career in 1955. He met Delores Kerkhoff of Morgan when she was visiting her sister in Royalton and continued to correspond with her. Philip and Delores were united in marriage on September 29, 1954 in St. Michael’s Catholic Church in Morgan and they settled in Morgan. He worked at his brother-in-law’s gas station and then signed on with the Redwood County Highway Department working there for 31 years, retiring on July 29, 1993 as area supervisor. Philip was a very active member of St. Michael’s Catholic Church in Morgan having served as usher, euchristic minister and working on the church dinners. Prayer was an important part of his life, praying the rosary daily and attending mass. His family was first and foremost with him. He enjoyed hunting, fishing, cross rock hunting, gardening and his “hobby farm” and would love to go for drives in the country going to the old home place.