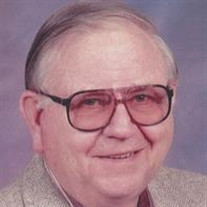 Percy Clifton MaKarrall, Jr., the son of Percy and Tilda (Brudelie) MaKarrall, Sr., was born April 5, 1928 on the family farm in North Hero Township, Redwood County, Minnesota. He spent his youngest years on the family farm, moving with his family to the Twin Cities for a time. When Percy was a junior in high school, the family returned to the farm and he finished his formal education at Lamberton High School, graduating with the Class of 1946. After graduation, Percy enlisted in the United States Marine Corp. Following his honorable discharge, Percy worked at the Lamberton Creamery for a short time, then began farming on the home farm.

On December 20, 1948, Percy and Arlette took the bus to Minneapolis and were married in the Methodist Church near where Percy grew up. They returned to North Hero Township where Percy continued to farm and also became employed by ASCS, measuring bins. He then became an adjustor for crop insurance and was later appointed the Redwood County Crop Insurance Agent. Percy was always a promoter and strong believer in the crop insurance program.

Percy and Arlette moved to Redwood Falls in 1983 and became members of the First United Methodist Church. Previously Percy served on the Lamberton Methodist church board, the Revere school board, and was Commander of the Revere American Legion Post. He served on the Federal Crop Insurance board of directors and was a member of the Masonic Antiquity Lodge #91 of Redwood Falls. Percy enjoyed collecting guns, Terry Redlin items, and belt buckles. He loved to spend time with his family, hunt and fish, and attend farm auctions.

Blessed be his memory.
To order memorial trees or send flowers to the family in memory of Percy MaKarrall Jr., please visit our flower store.