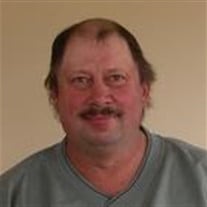 Paul “Rudy” Rothmeier, 51, of rural Clements died Saturday, February 1, 2014 at Mayo Health Systems in Mankato. Mass of Christian Burial will be held at 1 p.m. on Thursday, February 6, 2014 from St. Joseph’s Oratory in Clements with burial to follow in St. Joseph’s Catholic Cemetery, Clements. Visitation will be held on Wednesday, February 5, 2014, from 4 until 7 p.m., at Nelson-Martin Funeral Home in Morgan and will continue on Thursday at the Oratory for one hour prior to services.

Paul Richard Rothmeier, the son of Richard and Devota (Kokesch) Rothmeier, was born November 26, 1962 in Redwood Falls. He grew up on the family farm in rural Clements and received his elementary education at St. Michael’s School in Morgan. Paul attended Morgan High School and graduated there in 1981. Following graduation, he worked at an area dairy farm. In 1986, Paul returned to the family dairy farm and farmed with his dad.

Paul was a member of St. Joseph’s Oratory where, as a youth, he served as an altar boy. He belonged to the Jaycees and the Sons of the American Legion and was a board member of the Redwood County American Dairy Association. Paul enjoyed visiting with friends, league bowling and volleyball, old cars, and going to WeFest. He was always willing to help out a friend or neighbor.

Blessed be his memory.
To order memorial trees or send flowers to the family in memory of Paul "Rudy" Richard Rothmeier, please visit our flower store.