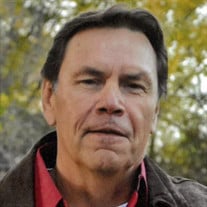 Patrick “Pat” David Blue, 66, of Morton died Saturday, August 11, 2018 at his home. Funeral services will be held at 11 a.m. on Friday, August 17, 2018 from the St. Cornelia’s Episcopal Church on the Lower Sioux Community with burial to follow with Military Honors in the church cemetery. Visitation will be held Thursday, August 16, from 4 – 7 p.m. with prayer service at 7 p.m. at the Nelson-Hillestad Funeral Home in Redwood Falls. Visitation will continue on Friday at the church hall, from 9 – 11a.m.

Patrick “Pat” David Blue was born June 5, 1952 in Redwood Falls, MN to Howard and Pearl (Jones) Blue. He was baptized and confirmed at the St. Cornelia’s Episcopal Church, Bishop Whipple Mission, Morton, MN. Pat attended school at Morton and graduated from Morton Senior High School in 1971. From 1972-1974 he served in the United States Army as a Private 1st Class, being honorably discharged after his service. In 1977 he was inducted in the Brick Layers Union and throughout his life he would continue his passion with his masonry work. From 1980-1982 Pat lived in Lawrence, Kansas where he studied to become a machinist at the Haskell Indian College. He worked seasonally for the National Park Service from 1983-1989 at Bandelier, NM, Grand Teton, WY, Yellowstone, WY, Rocky Bay National Park, CO, Grand Canyon, AZ. He also did various construction jobs from 1975 – 2000. Pat’s last employment was at Jackpot Junction Casino and Dakota Ridge Golf Course from 2001-2018 in Morton, MN.

He was preceded in death by his parents, Howard and Pearl Blue, brothers Ronald “Peewee” and Michael Blue.
In addition to the care given to Pat from Redwood Falls Hospice, we would like to thank his special friends Conner and Kim Thordson, Deb Robertson, Vernell Wabasha, Rita Goodthunder, his friends Vincent Sr., Gus, Ray, Curtis, and Don. After the church service, please join the family for dinner at the Jackpot Junction Ballroom.

Blessed be his memory.
To order memorial trees or send flowers to the family in memory of Patrick "Pat" Blue, please visit our flower store.