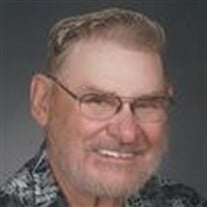 Oswald “Ozzie” Jordan, 83, of Redwood Falls died Monday, May 5, 2014 at Redwood Area Hospital. Funeral services will be held at 10:30 a.m. on Saturday, May 10, 2014 from St. John Evangelical Lutheran Church in Redwood Falls. Burial, with military honors, will follow in the Redwood Falls Cemetery. Visitation will be held Friday, May 9, 2014, from 4 until 7 p.m., at Nelson-Martin Funeral Home in Redwood Falls and will continue on Saturday at the church for one hour prior to services.

Oswald Adolph Jordan, the son of Carl F. and Ida (Balko) Jordan, was born March 10, 1931 in Redwood Falls. When he was four years old, he moved with his family to the farm where he spent the rest of his life. Oswald received his education in Delhi Public School and later attended Canby Vo-Tech. He was inducted into the United States Army and served during the Korean Conflict.

In 1960, Oswald married Lila Kuehn in Redwood Falls; she preceded him in death. On December 15, 1968, Oswald married Darlene Gaetke. Oswald farmed for over 45 years. He never really stopped farming but, following his “retirement” in 1995, he and Darlene spent their winters in Sebring, Florida. Oswald was a member of St. John Evangelical Lutheran Church and served as chairman of the finance committee. He was a member of the Redwood Elevator Board and served on the Kintire Township Board for over 20 years. Oswald was also a delegate to the Republican convention. He loved spending time with family and friends, traveling the world, talking about farming, and helping his family in any way he could.

Blessed be his memory.
To order memorial trees or send flowers to the family in memory of Oswald "Ozzie" Adolph Jordan, please visit our flower store.