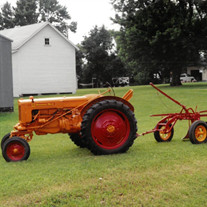 Orlean Alvin Stage, the son of Alvin and Malinda (Kletscher) Stage was born June 19, 1966 in Marshall, Minnesota. He graduated from Milroy High School and attended 2 years of college.

Orlean married Gail Raddatz on June 4, 1988 at the St. John Ev. Lutheran Church of Redwood Falls. After getting married they lived in Burnsville before returning home to the family farm by Vesta. Orlean enjoyed and took pride in fixing up the family farm. He loved farming, driving truck, cars, motorcycles, and camping with the family. Orlean also enjoyed cooking for the family gatherings when the children came home.

Orlean was an active member of St. John Lutheran Church in Vesta and was on the Wabasso Public School Board.

He was preceded in death by his father, Alvin Stage, infant sister, Cynthia, brother in law Jeff Carlson, nephew Andrew Carlson and his mother in law and father in law Harlan and LaDonna Raddatz.

In loving memory.
To order memorial trees or send flowers to the family in memory of Orlean Stage, please visit our flower store.