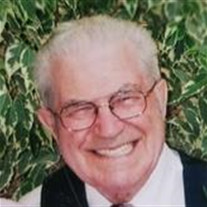 Norman Charles Rudenick, the son of Carl and Wilhemena “Minnie” (Dommer), was born March 17, 1921 on the family farm in Vail Township, Redwood County. He grew up on farms in Vail, Waterbury and Sherman townships and received his formal education in country school. Norman was inducted into the United States Army on September 4, 1942 from Fort Snelling, Minnesota. He served as a squad leader with the 35th Infantry Division, 137 Infantry Regiment, C Company of the 1st Battalion in Normandy, Rhineland, Northern France and Central Europe. On November 23, 1944, Thanksgiving Day, Norman and his company were captured and held as a Prisoners of War. Norman was a prisoner of war until May 8, 1945, when the war ended. He was honorably discharged with the Rank of Technical Sergeant on October 5, 1945 from Fort Sam Houston, Texas.

On July 16, 1945, Norman married Elaine Hammerschmidt in St. Anne’s Catholic Church, Wabasso. The couple made their home in Wabasso and later Redwood Falls. Norman was employed by the State of Minnesota Department of Transportation as a highway maintenance man for 36 years. He retired in 1986.

Blessed be his memory.
To order memorial trees or send flowers to the family in memory of Norman Rudenick, please visit our flower store.