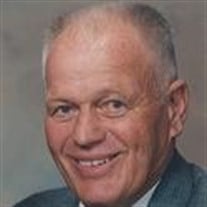 The family requests memorials be directed to First United Methodist Church of Redwood Falls, Gideons International, or charity of the donor’s choice.

Norman Dwight Ramey, the son of Lola Simons and Melbourne Ramey, was born November 29, 1926 in Faribault. The family moved to a farm in Redwood County in 1932 where Norman attended school in District 63 and graduated from Redwood Falls High School with the Class of 1944. He lettered in football, wrestling and track and was also active in band and choir. After serving two years with the United States Army in Germany, Norman enrolled at the University of Minnesota in Soil Sciences and Animal Husbandry. He graduated with honors with the Class of 1952.

Norman was a Junior Leader in the 4 Leaf Clovers 4-H Club and showed dairy calves at the State Fair. When a junior in high school, he was declared the Minnesota State 4-H Health Champion and went on to Chicago for the national competition. While there, he was declared one of the four healthiest 4-H Club members in the nation.

In 1955, Norman married Marlene Summers and they moved to Gilfillan where he was employed as the Fanny S. Gilfillan Memorial Farm Manager and also managed the Gilfillan Farms. In 1962, the Rameys purchased a Gilfillan farm in Paxton Township where the family still resides. Norman loved the land and was a true steward. He was active on the Redwood County Cattlemen’s Association Board of Directors, was past Chairman and Treasurer of the Redwood County Republican Committee, served on the Redwood County Farmers Mutual Board of Directors for 39 years, and was a 50-year member of the Masonic Lodge #91 of Redwood Falls. Norman belonged to Gideons International and was very active in the Gideon jail ministry in Redwood Falls for over 25 years.

The First United Methodist Church in Redwood Falls held a very special place in his life. Norman served on the Administrative Council, Staff Parish Relations Committee, and Trustees. He was a Sunday school teacher and youth leader. He also served as the Chairman of the Building Finance Committee when the new church was being built in 1959. Music was also very important to the Ramey family. Norm sang in the Chancel Choir for over 60 years and was a soloist. He also sang duets with his wife, Marlene, and a family quartet with their son, Karl and daughter, Ann.

Blessed be his memory.
To order memorial trees or send flowers to the family in memory of Norman Dwight Ramey, please visit our flower store.