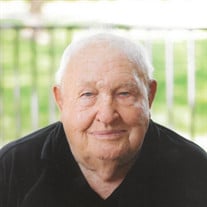 Norman Bendixen, 93, long-time resident of Morgan, died peacefully on February 5, 2021 at Gil-Mor Manor of Morgan, surrounded by family after living a very full life filled with family, friends and service. A Private Family Service will be held at Nelson-Hillestad Funeral Home in Redwood Falls, with burial in the Bethany Lutheran Church Cemetery, rural Morgan.

He was born on December 26, 1927 to Elmer and Aster Bendixen. Norman was born and raised on the family farm located in Three Lakes Township of Redwood County. Growing up Norman was active in 4-H. He fondly remembered showing cattle at the Redwood County Fair and the Junior Livestock Show at the Minnesota State Fair.
Norman graduated from Morgan High School in 1945. While in High School, Norman participated in the football and basketball programs. He enlisted in the United States Air Force on October 3, 1950. He received an Honorable Discharge on July 14, 1954. While he was in the Air Force, he was assigned to many bases throughout the US. He worked as an airplane mechanic. He called Ellsworth Air Force Base near Rapid City, South Dakota his favorite. He developed many lifelong friends that he met along the way and kept in touch with them and their families until his death. After his discharge, he returned home to the family farm near Morgan.
He married Delores Freyholtz on September 7, 1956. Norman was devoted to Delores and their children. When Delores was living in Gil-Mor Manor with Parkinson’s Disease, he went in every day and spent many hours with her and other Gil-Mor residents and staff.
Norman’s favorite sport was bowling which he enjoyed with his friends in Morgan and Fairfax for many years. He was a lifelong fan of the University of Minnesota Gophers, Minnesota Twins and Minnesota Vikings and passed his love for these teams on to his children. Often, in the summer, he would call up a couple of friends and take them, his father and his children to a Twins game on the spur of the moment.
Norman raised cattle and crops on the farm until he retired at the age of 65. He passed on his love for family and 4-H to his children and farming to Keith and Kerry.
He loved to meet people and make connections-he somehow never met a stranger. He had a kind and non-judgmental heart and found common ground with everyone he met regardless of how different they were from him. He also had a love for travel and exploring new places.
Norman was active in many community and farm organizations. He served on the Board of Directors at HarvestLand Coop for 15 years. He was a Founding Member of the Redwood Area Cattlemen’s Association for 25 years. He also served on the Redwood County Farm Service Agency Committee. Norman served as a supervisor of the Three Lakes Township Board for 24 years. Norman volunteered for many community organizations and was a member of the Lions Club and Friends of Gilfillan where he mowed lawn for many years every week. He taught Sunday School at Bethany Lutheran Church and was a Council Member.
Norman moved into Gil-Mor Haven in 2015 and later Gil-Mor Manor.
He is survived by his children, Kevin (Carol) Bendixen, Keith Bendixen, Kendra (Tom) Still and Kristin Bendixen. He had 7 Grandchildren- Kyle Phipps, James Phipps, Eric Bendixen, Aaron Still, Kevin Still, Alex Still and Alexa Bendixen, 5 Great Grandchildren and brother, Duane Bendixen, and sister, Shirley Nolting.
Norman is proceeded in death by his wife, Delores in 2010 and his son, Kerry in 2017.
A Celebration of Life will be held in the summer when it is safer for the community to attend. Family prefers memorials to Bethany Lutheran Church Cemetery Fund, 27220 Co Rd 13, Morgan, MN 56266 or Gil Mor Manor, 96 Third St E, Morgan, MN 56266.

Blessed be his memory.
To order memorial trees or send flowers to the family in memory of Norman E. Bendixen, please visit our flower store.