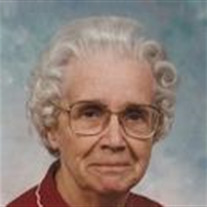 Norma Grace Bunting, the daughter of Roy and Fannie (Parsons) Bunting, was born May 8, 1920 on the family farm in Delhi Township, Redwood County. She received her formal education in Delhi Public School, graduating with the Delhi Class of 1938. Norma lived on the family farm until moving into Redwood Falls in approximately 2010.

Norma’s first job was as a clerk in the Delhi grocery store; she then worked for the Delhi School for a time. Norma was employed at Knutson Jewelry and later Miller Jewelry, both in Redwood Falls. She retired in approximately 1978. Norma was a member of the Delhi Presbyterian Church where she taught Sunday school and served as church treasurer. After the church closed, Norma attended services at the Echo Alliance Church for a time.

She is survived by her sister Clara Swanson of Blaine; and sisters-in-law Delores Bunting and Mildred Bunting, both of Redwood Falls, and Florence Bunting of Hector; and many nieces and nephews. Norma was preceded in death by her sister Vera Bunting; sister and brother-in-law Mabel and Clyde King; brothers Kenneth, Willard, and Charles Bunting; brother-in-law John Swanson; and one niece.

Blessed be her memory.
To order memorial trees or send flowers to the family in memory of Norma Grace Bunting, please visit our flower store.