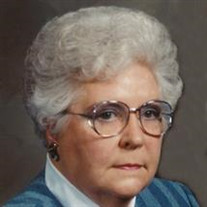 Nelda Mae Simning, the daughter of Andres and Eva (Overmeyer) Anderson, was born May 17, 1924 in New Avon Township, Redwood County. When Nelda was 10 years old, the family relocated to the farm in Vail Township that was her home until she moved to Johnson Park Place in Redwood Falls. As a child, Nelda attended rural schools and Wabasso Public School, graduating from Wabasso High School in 1942. Nelda worked at Zieske Lumber Company as a secretary/bookkeeper.

On October 21, 1943, Nelda married Douglas Simning at the New Avon United Methodist Church, where she had been baptized and confirmed. She was a homemaker all her married life. Nelda enjoyed reading, baking, cooking and doing embroidery. She taught religious release time classes and was president of the United Methodist Women’s group for several years. She also sang in the choir.

Nelda is survived by her son Gary (Nancy) of Saginaw; grandson Douglas (Susan); nieces and nephews; many cousins in Sweden and the United States; and very special friends Sally and Melvin Schueller and family.

She was preceded in death by her husband Douglas; her parents; sister and brother-in-law Betty and LeRoy Bock; and brother and sister-in-law Dallas and Bernice Anderson.

Blessed be her memory.
To order memorial trees or send flowers to the family in memory of Nelda Simning, please visit our flower store.