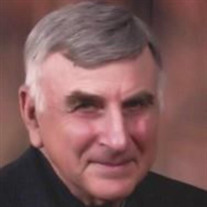 Buddy loved his family. His wisdom and encouragement were invaluable to his children, grandchildren and great-grandchildren, who all held a very special place in his heart.

Buddy loved the land. He started farming at an early age and continued to farm as long as he was physically able. Even then, his interest never waned, and he remained involved in farming as much as he could. Later in life, his eyes would light up whenever a visit to the farm was in order. Buddy loved so many animals. Raising cattle through all environmental elements, relaxing on the patio with his dog and cats, a pet squirrel or two, or any animal that his children and grandchildren loved.

Buddy loved people. He especially enjoyed moving snow for those who needed his help. His expertise was invaluable when he became a founding Director of Southern Minnesota Beet Sugar Cooperative. It’s likely he didn’t realize how many thousands of people benefitted from the jobs and businesses that were created as a result of the founding SMBSC.

Buddy loved his faith. He was instrumental in joining the leadership to relocate and build St. Catherine’s Catholic Church in Redwood Falls, and anyone who knew him quickly learned to look for Buddy and Joann seated in the front, center rows of church on Sunday mornings. Buddy loved life, and he valued and treasured his friends. He was always quick with a laugh, and the twinkle in his eyes was an invitation to get to know him—and he was known by many. Through his lifelong friendships, he enjoyed playing cards and experiencing life’s adventures with those who were close to him.

Blessed be his memory.
To order memorial trees or send flowers to the family in memory of Miloyd J. "Buddy" Dolezal, please visit our flower store.