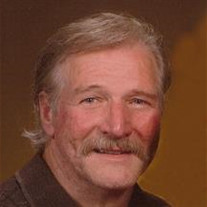 Michael Edwin Canaday, the son of Edwin and Lois (Kirkpatrick) Canaday, was born November 21, 1945 in Le Mars, Iowa. In 1949, the family moved to a farm south of Redwood Falls where Mike grew up. He received his formal education in Redwood Falls public schools and graduated from Redwood Falls High School in 1963. Mike relocated to Ghent in 1971 and returned to Redwood Falls in 1975. He served with the Minnesota National Guard from 1963 until 1969.

On June 27, 1969, Mike married Patricia Jean Thorston at Sundown Lutheran Church near Springfield. They had two children, Karo and Jeremy, and later divorced.

On December 10, 1977, Mike married Brenda Mattson in Windom and they made their home in rural Redwood Falls where Ryan and Haley were born.

Mike worked as a sheet metal fabricator at Specialty Engineering and later ActiveAid, where he retired in January 2011. Mike loved farming, gardening and anything that involved being outdoors – which is where he felt most connected to God. In his spare time Mike enjoyed riding and repairing bicycles, riding motorcycles and four-wheelers. He had a passion for ice cream and black licorice. Mike cherished time spent with his grandchildren. He loved life, he loved his family and he loved God.

Blessed be his memory.
To order memorial trees or send flowers to the family in memory of Michael "Mike" Edwin Canaday, please visit our flower store.