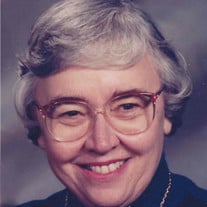 Meredith Castor, 83, died at Gil-Mor Manor in Morgan on Saturday, August 30, 2014. A memorial visitation will be held on Friday, September 5 at Harvest Baptist Church (420 E 5th Street) in Redwood Falls from 6:30 until 8 p.m. A memorial service will be held on Saturday, September 20 at Highland Community Church (1005 N. 28th Ave.) in Wausau, Wisconsin at 2 p.m. Interment will be at Fort Snelling in Minneapolis, MN at a later date.

Meredith was graduated with honors from the Mayville High School class of 1949. She later received her teaching certificate from the Milwaukee State Teacher’s College. Meredith taught kindergarten for many years in schools in Wisconsin and Minnesota. She married Gail Castor on December 31, 1960 and shared nearly 54 years with him as a loving wife and as mother of their two children.

Mrs. Castor was devoted to her family and was active in the communities in which she lived. She was also a valued member of her church. Over the years she served as treasurer, chaired the fellowship committee, led Bible studies, and helped with almost every other aspect of church life. No matter what needed to be done in her family, her church, or her community, she could be counted on for doing the job well, and with a joyful heart of service.

After her children were in high school, Meredith returned to the work force as a care provider in a home for adults with special needs and in an adult day care program in Redwood Falls.

Mrs. Castor also enjoyed gardening, watching the birds and squirrels at her feeder, her pets, traveling, and spending time with family and friends. Meredith enjoyed all of God’s creation and never ceased to comment on the beauty of a flower, the majesty of a mountain, the grandeur of a waterfall, or the shapes of the clouds. She rescued birds that hit her windows, and fed whatever stray dog or cat that found its way to her door.

Meredith will always be remembered for her love and devotion to her family and friends, for her warm smile and ready laugh, for her selfless acts of service, and for the appreciation and care she showed for all of God’s creation. She will be dearly missed, but we are confident she is now with her Savior where she is eagerly awaiting the arrival of all of her loved ones who share her love of Christ.

Please do not send cut flower arrangements as the fading blossoms remind her family of her passing.
To order memorial trees or send flowers to the family in memory of Meredith Ann Castor, please visit our flower store.