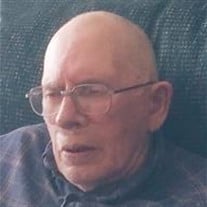 Maynard Winton Burdick, the son of Clark Richard and Clara (Schultz) Burdick, was born August 10, 1937 in Redwood Falls. He grew up in North Redwood and received his formal education there. Maynard was employed by Redwood Tile Company from 1964 until 1968. He then was hired by Central Bi-Products where he was employed until his retirement.

Maynard loved hunting and nature. He hunted bear and elk with friends and also did a lot of river fishing. Maynard knew a lot about guns and made his own bow and arrows. He and his brother, Harl, lived on a little farm site near the Minnesota and Redwood rivers where they watched wild turkeys come right up to the house. Maynard and Harl enjoyed watching eagles land in the field nearby and listening to coyotes howl in the evening. Maynard also loved gardening and raising lilies.

Blessed be his memory.
To order memorial trees or send flowers to the family in memory of Maynard Winton Burdick, please visit our flower store.