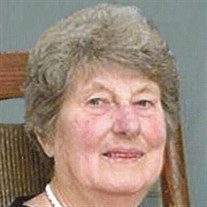 On August 16, 1958, MaryJean married Herb Brauer at Trinity Lutheran Church. They made their first home in Madison, Wisconsin while Herb was in college. Mary worked as a bank teller at Madison Savings and Loan, and then office manager at the Park Hotel. After Herb began his employment with J.C. Penney Company, the family lived in the Wisconsin cities of Racine, Sheboygan and Manitowac until moving to Redwood Falls in 1974.

Family was most important in Mary’s life. Her family is blessed with fond memories of thoughtfully planned holidays and frequent get-togethers that always had her special touch. While assisting Herb with the office responsibilities at Lutheran Brotherhood Insurance Agency, she also owned and operated the Unique Boutique for several years. Mary enjoyed collecting antiques, dollhouse miniatures, and McDonald’s memorabilia. She was an active member of Gloria Dei Lutheran Church. Mary belonged to Friends of the Library where she served as president, and also served on RALF (Redwood Area Library Foundation). Mary and Herb enjoyed traveling by bus, train, cruise ships, and car. They traveled to all but one state in the U. S. and enjoyed trips to numerous destinations around the world.

Mary is survived by her husband Herb of Redwood Falls; children Tori (Craig) Kroger of Heron Lake, Tom (Cheryl) Brauer of Miltona, and Chris “Bug” (Doug) Brouwer of Worthington; grandchildren Leah (Jason) Wacek of New Prague, and Luke (Hannah) Kroger of Luverne; and great-grandchildren Norah, Cara, Ruby, and Simon Wacek, and Tristan Kroger. Also surviving are her sister Susan Cramer of Random Lake, Wisconsin; brother- and sister-in-law Dolf and Nancy Brauer of Sheboygan; and five nieces and nephews and their spouses. Mary was preceded in death by her parents; and her brother-in-law Noel Cramer.

Blessed be her memory.
To order memorial trees or send flowers to the family in memory of MaryJean Brauer, please visit our flower store.