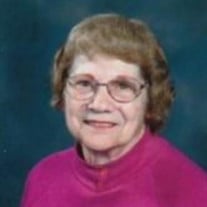 MaryAnn (Wagner) Kerkhoff, born July 21, 1928 in Redwood Falls, Minnesota. MaryAnn was the third child of Joseph Jr. and Laura (Heiling) Wagner. She attended grade schools in the Morgan, Clements, and Lucan area. MaryAnn graduated from Milroy High School in 1946. She worked at the JCPenny store in Redwood Falls until 1947. On August 26, 1947 MaryAnn married Dalbert Kerkhoff at Our Lady of Victory Church in Lucan. Together they lived in the Morgan area and farmed for many years. MaryAnn worked various jobs after marriage. She was employed at Cardinal Café in Redwood Falls, Fingerhut in Bird Island, and at the drug store and bank in Morgan, until retiring July 30, 1990. She enjoyed spending time with family, playing cards, and being with relative and friends.

In her loving memory.
To order memorial trees or send flowers to the family in memory of MaryAnn Kerkhoff, please visit our flower store.