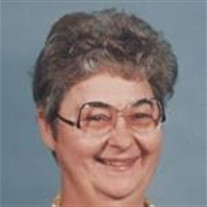 Mary Ann Zachariason, 77, of Sauk Centre and formerly of Morton passed away Monday, June 23, 2014 at Centra-Care Nursing Home in Sauk Centre. Funeral services will be held at 2:30 p.m. on Saturday, June 28, 2014 from Living Word Church in Redwood Falls with burial to follow in the Morton City Cemetery. Visitation will be held Friday, June 27, 2014, from 5-7 p.m. at Nelson-Martin Funeral Home in Redwood Falls. Visitation will continue on Saturday at the church for one hour prior to services.

Mary Ann Clara (Schloegl-McColley-Conrad) Zachariason, the daughter of Joseph and Margaret (Santer) Schloegl, was born May 29, 1937 near Sauk Centre. On February 8, 1955 Mary Ann married Byron McColley and together they had four children. She later married Dennis Conrad and then Gerald Zachariason.

Mary Ann was a devoted mother to her four children. She worked at various positions throughout her life, including owning the Morton HiWay Café where she met and later married Gerry. Mary Ann was a very devout Christian and member of Living Word Church. She gladly volunteered time to her church. She spent the last four years at Centra-Care Nursing Home.

She was preceded in death by her three husbands; son Dale; parents; brother Benny; and great-grandson Ethan.

Blessed be her memory.
To order memorial trees or send flowers to the family in memory of Mary Ann Zachariason, please visit our flower store.