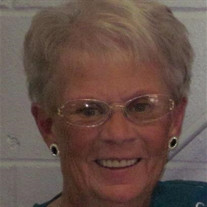 Mary Lou Tubes, the daughter of Walter and Frieda (Arbes) Boelter, was born September 21, 1940 in Springfield. She grew up in the Sanborn area. Mary Lou received her formal education in District 71 rural school and Sanborn High School, graduating in 1958.

On March 30, 1959, Mary Lou married Kenneth Turbes in St. Mathias Catholic Church in Wanda and they made their home in Wanda until 1964. At that time, the family moved to Redwood Falls where Mary Lou and Ken have resided since. She was employed at Control Data in Redwood Falls for 10 years, retiring from there in 1979. Mary Lou and Ken were caretakers at Nelson-Martin Funeral Home from 2004 until 2009. Mary Lou put her family before all. Her grandchildren and great-grandchildren gave her so much joy. She loved helping others. Mary Lou enjoyed sewing, gardening, dancing and camping – and especially spending time with her family. She had a great love for animals, especially her dog, Trixie.

Blessed be her memory.
To order memorial trees or send flowers to the family in memory of Mary Lou Turbes, please visit our flower store.