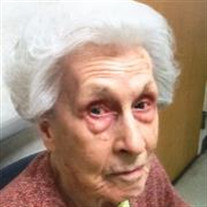 Local arrangements are with Nelson-Martin Funeral Service of Redwood Falls. E-mail condolences may be sent via www.nelsonmartinfuneralservice.com .

Mary graduated from Redwood Falls High School in 1939. She was proud to serve as Lieutenant of the World War II era, U.S. Army. Mary worked as a civilian dietitian for the U.S. Navy. She was a graduate of St. Catherine's College, St. Paul.

She was the beloved daughter of the late Leo and Inga (nee Erickson) Dwyer. Mary was the loving sister of Tom (Kathy Teipen) Dwyer, Joseph (Marilyn) Dwyer and the late Margaret (Walter) Kinney, James (Betty) Dwyer and Francis (Helen) Dwyer. She is also survived by numerous nieces and nephews, and many dear friends.

Blessed be her memory.
To order memorial trees or send flowers to the family in memory of Mary Catherine Dwyer, please visit our flower store.