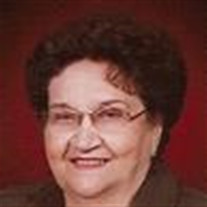 Martha (Schneider/Serbus) Nesburg, 86, of Redwood Falls died Monday, March 21, 2016 at Mayo Health System, Mankato. Memorial Mass will be held at 10:30 a.m. on Tuesday, March 29, 2016 from St. Catherine’s Catholic Church in Redwood Falls with inurnment to follow in St. Mary’s Catholic Cemetery, Bechyn. Visitation will be held on Monday, March 28, 2016, from 4 until 7 p.m., with a prayer service at 6 p.m., all at Nelson-Hillestad Funeral Home in Redwood Falls. Visitation will continue on Tuesday, from 9:30 until 10:30 a.m., at the church.

Martha Rose Nesburg, the daughter of Henry and Anna (Malecek) Schneider, was born September 2, 1929 in Henryville Township, Renville County. She grew up in the Bechyn area and received her formal education there.

On April 24, 1947, Martha married George F. Serbus and they made their home in the Bechyn area. George preceded her in death. On June 8, 1979, Martha married James O. Nesburg. She shared many happy years with these men.

Martha’s family was most important to her and she was the happiest when they were around. Martha’s face would light up when family came to visit! She was always there for her children and taught them many valuable life lessons – both directly and indirectly. Martha had a kind and generous spirit. Whoever coined the phrase “she’ll give you the shirt off her back” must have known Martha. She was generous when she had plenty and generous when she had little. Martha was a member of St. Catherine’s Catholic Church. She was also an active member of St. Theresa’s Missions Club, where she quilted for missions.

Blessed be her memory.
To order memorial trees or send flowers to the family in memory of Martha (Serbus) Nesburg, please visit our flower store.