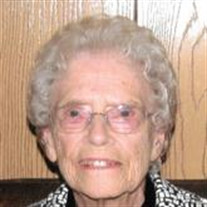 Marcella Frances Plaetz, the daughter of August and Agnes (Fangman) Lensing, was born November 22, 1922 on the family farm near Bancroft, Iowa. In 1924, Marcella moved with her parents and sister Margret to a farm near Wabasso. She was baptized in St. John’s Catholic Church in Bancroft and received First Communion and Solemn, Confirmation at St. Anne’s Catholic Church. Marcella attended St. Anne’s Catholic School through the eighth grade and then received her high school education in Wabasso District 640. Following graduation she worked as a bookkeeper for the Wabasso Creamery for seven years.

On March 31, 1948, Marcella married Lawrence Plaetz at St. Anne’s Catholic Church. They lived on farms in the Lucan area and were parishioners of Our Lady of Victory Catholic Church. The couple moved into Lucan in 1982 where they had a new home built. Marcella was a 60-year member of OLV Catholic Church. She was very active in the parish, serving on the Parish Council for 10 years. Marcella also served on the Liturgy committee, helped with church laundry, and arranged the church flowers for 20 years. She was a Eucharistic Minister for OLV Church and shut-ins for 17 years, a CCD teacher for 15 years, OLV Catholic Aid Treasurer for 20 years, and held many offices in the CCW. In 1996, Marcella received the Bishops award for service rendered to the OLV Catholic Church. She belonged to an Extension group in Lucan.

Marcella was preceded in death by her husband Lawrence in 2003.

Blessed be her memory.
To order memorial trees or send flowers to the family in memory of Marcella Plaetz, please visit our flower store.