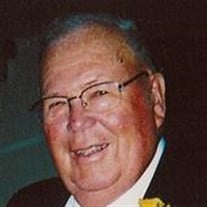 Lyle “Sour” Greenslit, 78, of Franklin died Friday, May 27, 2016 at Golden Living Center in Olivia. Memorial Services will be held at 11 a.m. on Wednesday, June 1, 2016 from Cross of Calvary Lutheran Church in Olivia. Inurnment will follow in the Morton City Cemetery. Visitation will be held Tuesday, May 31, 2016, from 4 until 7 p.m., at Nelson-Hillestad Funeral Home in Redwood Falls, and will continue on Wednesday, from 10 until 11 a.m., at the church.

Lyle Vernon Greenslit, the son of Vern and Marion (Powers) Greenslit, was born March 31, 1938 on the home farm in Birch Cooley Township, Renville County. He grew up on the family farm and received his formal education in Morton Public School. Following his graduation from Morton High School in 1956, Lyle began farming.

On October 22, 1960, Lyle married Karen Lothert and they lived on the family farm. Lyle farmed until 1993 and also was employed by Royal Lumber, Sullivan Farms, and Jackpot Junction as well as owning and operating Big K’s Bar. He was a member of Zion Lutheran Church in Morton. Lyle served on the Morton School Board for 12 years and was a life-long member of the Franklin Lions Club. He enjoyed golfing, playing cards, bowling, fishing, traveling, and bar hopping.

Lyle is survived by his wife Karen of Franklin; children Gary (Terry) Greenslit, Rodney (Cathy) Greenslit, and Lynn (Steven) Johnson; nine grandchildren; seven great-grandchildren; and sisters Joyce Haubrick, and Karen (Gary) Toren all of Bird Island. He was preceded in death by his parents, and brother-in-law Dick Haubrick.

Blessed be his memory.
To order memorial trees or send flowers to the family in memory of Lyle "Sour" Greenslit, please visit our flower store.