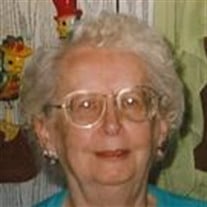 Lucille Opal Muenchow, the daughter of Milton F. and Clara (Zuehlke) Tripp, was born September 30, 1928 in Kanawha, Iowa. She spent her youngest years in Kanawha and then moved with her family to Clinton, Minnesota. Lucille received her elementary education in country school and graduated from Clinton High School in1944.

On December 5, 1948, Lucille married Clifford A. Muenchow. They made their home in Ortonville before moving to Belview and later Seaforth. Although she was first and foremost a wife and mother, Lucille also worked as a clerk at Ben Franklin. She loved reading, going to auctions, gardening, and going on trips. Lucille enjoyed solving cryptograms and puzzles.

Blessed be her memory.
To order memorial trees or send flowers to the family in memory of Lucille Opal Muenchow, please visit our flower store.